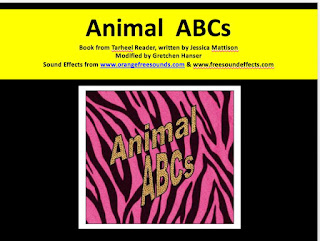 WHAT:  This book was originally posted in Tarheel Reader.  Gretchen downloaded it and made changes to support students with CVI.  We are sharing it so everyone can enjoy it!

WHO:  The book was written by Jessica Mattison and posted at Tarheel Reader:
- www.tarheelreader.org

It was modified by Dr. Gretchen Hanser. 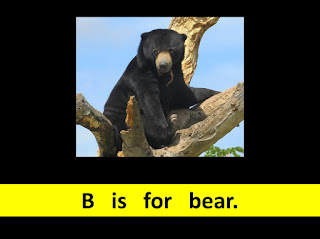 HOW:  Gretchen made the following changes to support students with CVI:
1) Added a black background to each slide so that the pictures would 'pop'
2) Added a yellow background to each text box, so that the words would also 'pop'
3) Made the font larger, bolder, and added 3 spaces between each word to support print tracking
4) Added a bold transition so that students will definitely notice page turning (note:  it is called 'Box' in the current version of Powerpoint)
5) Added a sound effect for each animal (resources listed on cover page)

NOTE:  You might need to 'tweak' this further to match the needs of your students, but this is a great place to start!!

WHERE:  Get the revised and CVI-friendly version of ABC Animals using the click below:
ABC Animals CVI-Friendly Book

Posted by Caroline Ramsey Musselwhite at 8:11 AM