WHO:  This is for students who are learning to use the alphabet for initial sounds, and also learning to separate items into categories

WHY:  For students are nonspeaking, initial letter knowledge is particularly important.  When initial letter cueing is combined with categories, students have access to a much larger vocabulary.  For example, clothing - P might be pants or purse, while snack - P might be popcorn or peanuts or pretzel.

HOW:  Include categories + letters in games and activities.  These are listed in order of difficulty.  Guess My Word is easiest as the student has a picture to look at during the game.  Bag Game is a bit harder as student looked at a picture, but then must remember it.  Predictable chart writing is harder because the student must think of something in their head, then use category / alphabet to translate the thought and share it. 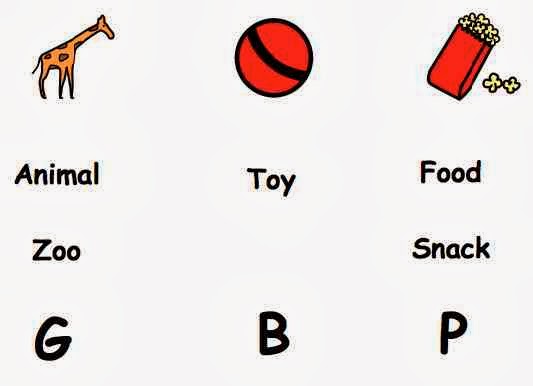 The Bag Game App:  Categories + Letters
Play the Bag Game
- One student works with adult to pick an item, which is then hidden
- Proceed as for Guess My Word (giving category clue, then letter clue)

Predictable Chart Writing:  When writing a book 'I Like ______', student picks a response, then partners help him give clues:
- It's a toy (friends guess)
- It starts with B (friends guess until they figure out the word ball)

MATERIALS:
1) Alphabet display, such as:
-  AlphaBoard
- Alternative Pencils CD
- Apps such as AbiliPad  or  Panther Writer
- Apps such as Magnetic Alphabet  or Word Wizard (for showing a few letters at a time)
- The keyboard on an AAC device
- Alternate computer keyboards such as IntelliKeys or Big Keys

3) Symbols indicating categories such as clothing, food, animals, plus sub-categories (ex:  under animals, you might have zoo, farm, pet)
Posted by Caroline Ramsey Musselwhite at 7:09 AM